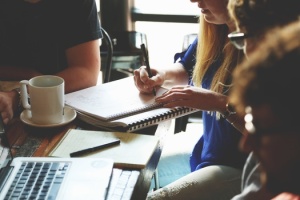 I was running a foresight session a few years ago and we were talking about work-life interaction – specifically the use of social media during formal work hours. Perhaps unsurprisingly given the age of the audience there was scepticism (another post perhaps) about the efficiency of this. One of my colleagues said “But things do change – did you think when you started work that you would spend at least 50% of your time each day on email?” Apart from the comment “50%? And the rest!” everyone agreed that email was a nightmare. But . . . email was one channel (although we had face to face, phones as well – having seen off telexes and faxes by then).

Now, let’s see – I’ve got a blog on wordpress, a linkedin page, posts and company page, multiple email accounts, IM, twitter, texts, phone, the odd face to face meeting (!) and now Slack. Along the way I’ve played with Yik Yak, Pinterest and am about to open an Instagram account. And of course various financial sites too. Plus not just powerpoint, but Prezi, Videoscribe and Adobe Voice to help me communicate. And I am well aware that I am not particularly up to date or active in the digital space.

So I am intrigued as to when we stopped moaning about email and embraced so many alternatives. Because on the face of it, it’s more bewildering and difficult to manage these multiple channels than the single email route. (I should perhaps confess that because I had a really long daily commute I never got overwhelmed by email but simple swopped the one evil for the other). Is it really because, as many would have it, we are now in control of all these channels? We can choose whether or not to post, or tweet or to reply? Or have we simply become addicted to digital communication in a way that email never inspired and that control is a delusion? And what are the inevitable consequences of that?

I’m interested because of a parallel track of thinking. When I’m running a foresight session I commonly ask what people think will have disappeared in say 5 years time. There are 2 very common responses – cash and pens. And when we discuss the latter, people begin to think that handwriting might disappear as well. Because in none of the above does snail mail, letter writing appear. And whilst I will confess I do write letters, it is becoming rarer and rarer (and I freely admit my handwriting is getting worse). All of which stems from the ability of almost everyone (but importantly not all) to exchange digital notes. So if we continue down this route what happens to our abilities to communicate? And how do we talk to the ‘have nots’ and ‘choose nots’ of technology?

And what physical consequences are there? Texting thumb is an identified issue as is the hunched neck and shoulder of a mobile addict. It is less these individual consequences that interest me so much as how fast this is all happening. We think of evolution in generations – centuries or millennia, not years or decades. I’m also interested in an updated version of the infinite monkey theorem. If we gave smart phones to monkeys would they develop texting thumb and how fast?

I’m certainly not the first to raise the issue – but I am fascinated by our ability to detest (but become ruled by) one form of digital communication (email) whilst embracing so many others – and interested in the evolutionary experiment we are running!

Comments in my blog represent my personal views not those of my current or previous employers but are inevitably influenced by my working life, past and present colleagues, friends and family - such is life! View all posts by macinn2013

This site uses Akismet to reduce spam. Learn how your comment data is processed.