It would be fantastic if we all delivered work, lived our lives, bought stuff etc etc for the right reasons. But sometimes, the right reasons aren’t enough. Climate change and the environmental consequences have been discussed for many years, and many people understand that in an ideal world, we should all use less energy, less water, eat less food and so on. At the conceptual level, there are few who would not subscribe to the view that we should always, indeed must, consider future generations. And yet, it is clear from the limited changes to date that environmental concerns, and debates about impact are insufficient to change behaviours substantially.

At the organisational level, financial and commercial drivers sit more comfortably with day to day strategies and tactics. And increasingly environmental issues have a direct earnings or profitability impact. Interestingly these are by no means all negative. So on the risk side, the Thai floods of 2011 are illustrative of the issues:

But what about opportunity? The McKinsey report in Sept 2015 on Europe’s circular economy opportunity illustrates that addressing environmental concerns through recycling, repurposing and making supply chains more efficient can provide huge returns. This is therefore a real opportunity as well as an essential move. And beyond the direct economic benefits, the rise of the collaborative consumption economy fuelled in part by a desire by some consumers to use less, have less of an environmental impact and make more of what we already have is a further indication of the commercial opportunity here.

It was this evidence of the broadening impact of each successive wave of technology that I talked about in my last ‘card’ on the CIAO website. And it links strongly with BreakingSmart which I am still digesting but which seems to me to develop and refine these simple statistics further. Venkat Rao discusses in his first essay how software (and more specifically Marc Andreessen’s view that ‘software is eating the world’) relates to previous innovations – only two of which, written language and money were ‘soft’ technologies. I will make no attempt to paraphrase the great story told in BreakingSmart, but the point that software (in the form of the internet and the applications which leverage it) is enabling faster and broader impact across the globe.

And I think it is interesting to compare this to previous such revolutions – take electricity for example.The focus is inevitably on the pure technology in the beginning. Punch in 1848 has this to say:

INSTEAD of there being the slightest chance that wonders will ever cease, we have strong reasons for thinking that wonders have only just begun. The last new marvel is a Company for lighting our streets, our shops, our houses, and even our bed-candlesticks with electric fluid, so that we may sit, and read or write by flashes of lightning, and go to sleep with a column of electric fluid doing duty for a rushlight in our room. The new lights that have sprung up within the last few years have been extinguishing and snuffing each other out in rapid succession. The first breath of science blew out the dips, which fell prostrate under the wand of discovery, and then came the metallic wicks, offering “metal more attractive” than the cotton, of whose existence ingenuity has at last cut the thread. Chemistry then took the candles in hand and superseded with the composite fashion the once popular “mould of form,” until the public, having noted the presence of arsenic, stopped its nostrils and its patronage. The electric light now threatens to supersede all, and considering the universal use now made of electricity, we should not be surprised at the formation of a Company to fix a lightning conductor instead of the ordinary conductor to every omnibus.

What is blindingly clear from this is just how difficult it was in 1848 to predict what and how electricity would do to promote growth and change. Instead the focus is on how it changes the ‘how’ of every day activities. There is no reference to the ability of the technology to create entirely new industries (both in power generation and in the application of electricity) nor of the dependence that electricity would increasingly provoke as it became a ubiquitous utility. Thinking about the digital universe we seem to be not much further than our own 1848 position now – in KPCB Mary Meeker’s Internet Trends 2015 she says “Whilst consumer internet entrepreneurs often pursue personal passion, ‘Enterprise’ internet entrepreneurs often pursue prior company pain points’ and we in the corporate world still seem to be seeking in many ways to deal with the issues of today or even the past, rather than the opportunities of the future. As a result there sometimes seems to be an increasing divide between the new opportunistic talent and a corporate rear-guard.

But as electricity shows us the two either marry up, or the former outstrips the other – giving rise to the next step change in growth. 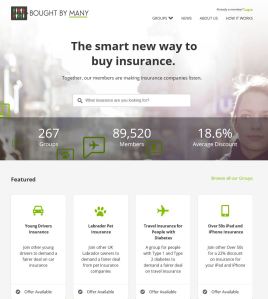 My latest card on CIAO is on ‘bought by many’ insurance as an example of how global connectivity is driving commercial shifts in conventional business models. And of course in this instance it is very reminiscent of the old mutual funds of the industrial revolution, with people (in this case in close geographic rather than virtual) in close proximity grouping together to create a protective mutual fund.

And that triggered a thought as to what else was a new invention of an old model. After all, Guest Houses and Bed & Breakfast offers have been around for decades without anyone suggesting that the hotel industry is under threat globally. And the auction model behind eBay is centuries old. So what is it that is truly different if it isn’t the product underlying the transaction?

It is to my mind another example of experience overtaking service which has overtaken product as the key attribute of any transaction. That experience can be made up of many things, some of which are not really related to the transaction at all – the experience of browsing AirBnB for example feeds dreams of holidays as much as it does provide a solution.

Choice too is part of the experience – the choice of global offerings (Etsy being a prime example) rather than local or national. And of course convenience – all done with a few clicks rather than needing to visit or phone.

So I started to think about what else that experience offers – how far in the value chain does it extend? In the case of AirBnB you may not actually be wanting or needing to travel at all – browsing through where you might go can happen in the absence of any specific trip (although it may then become a trigger for that trip). So that extends the journey in advance of a specific transaction, And similarly, getting to know the owners of where you stay may result in new friends – extending the chain well beyond the specific visit.

Experience is becoming key for customers but increasingly I think it offers huge value to providers and suppliers too, in creating extended and different value chains for old models. Numerous new points of contact with customers, and opportunities to build the relationship. So perhaps these are new models rather than just reinventions of old . . . .